Setting the timing and points 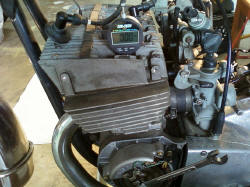 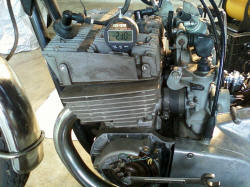 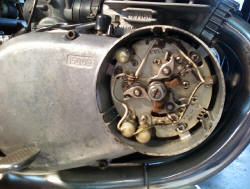 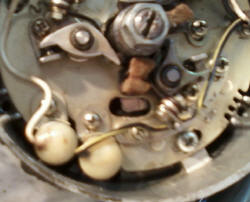 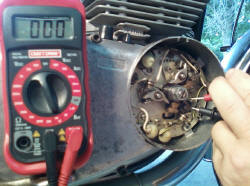 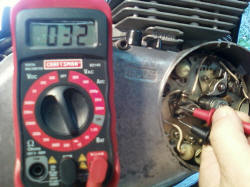 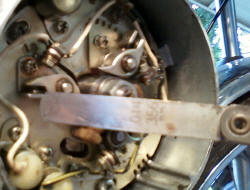 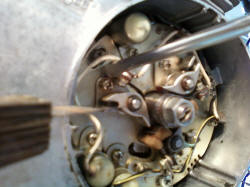 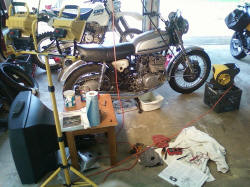 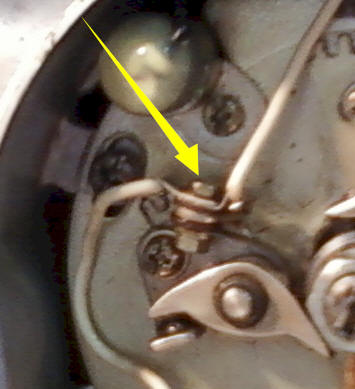 But the tachometer was not turning, and the experts tell me this is a sign that the small shaft that turns the
tach drive is not working properly, and this shaft also turns... the oil pump!

July 20, 2010 - Pulled the tach drive, looks ok. Something is definitely wrong with the oil pump shaft. 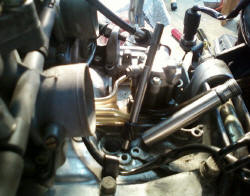 After putting it together, it ran and the oil pump and tach are working. But I FUBARed the kickstarter spring mechanism and the kickstarter
drooped down by the footpeg like a Harley rider in need of Viagra.

So, off comes the clutch cover (again).

Aligned the timing marks on the crank, aligned the L mark on the timing plate, put it back together and added oil. She runs, kickstarter works, and it's getting oil. But it's clear
that the carbs are out of adjustment.

Next: clean the carbs and the petcock, to ensure good fuel flow.  Carb Inspection post.

After putting the carbs back on, the bike would run, but not idle well--it wanted to rev up to 5000rpm when the clutch was pulled in or it was in neutral. I decided that the starter circuit (choke)
must be leaking, so off come the carbs again.

I managed to ride the bike to a state inspection center to get the sticker and get a Vehicle ID Certification, in order to transfer the out of
state title and get a license plate.

Cleaning the starter plunger seat and adjusting the slides.

August 3, 2010
After putting the carbs back on, the bike began to run much better. It idles smoothly at 1300rpm and accelerates well. It does not respond crisply below 3000rpm, so I will put the stock
airbox back on and see if that helps. I put the oil pump cover, Ram Air Induction cowling, and side panels back on and gave the bike a 70 mile road test. She came through with flying colors.

May 2012: Replacing the gauge glass 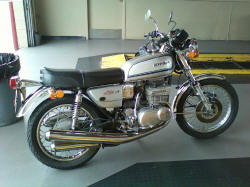 Return to The MOTO-DUDE DOMAIN